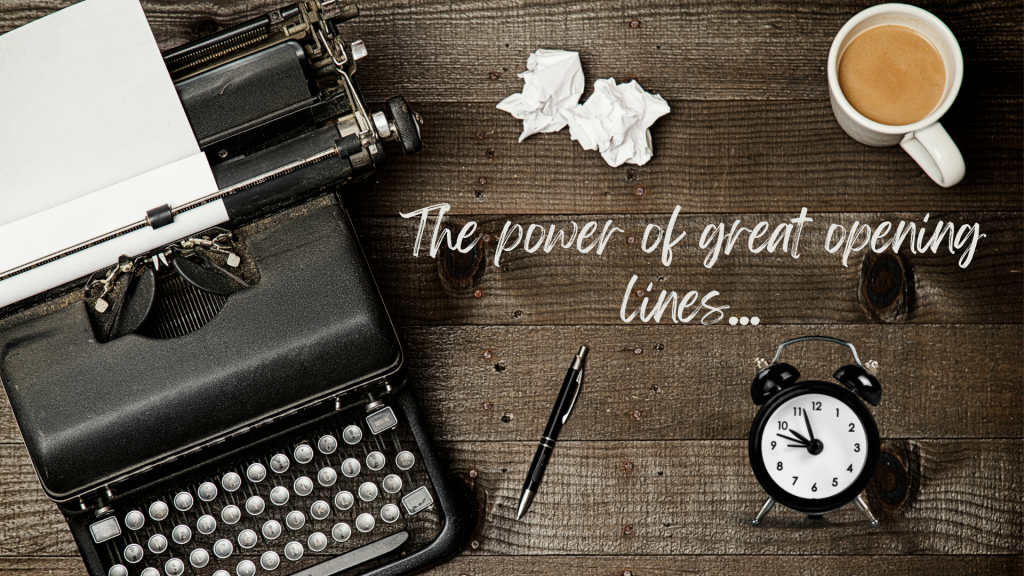 The Power of Great Opening Lines

Today, everything must move in a blur. Downloads can’t be fast; they need to be instantaneous. Calling friends on the cell takes too long and is so yesterday. Just text them. If they care, they’ll text back. If it can’t be squeezed into a tweet, it isn’t worth sharing. And don’t get me started on Tik-Tok. The average view is thirteen seconds! Really? Tik-tok-ers have just few seconds to catch viewers’ eyes…or else they’ll be swiping on to the next one.

I’m not sure who’s to blame but that’s the reality.

The same principle applies to writers and books today. Of course, it has always been that way, kind of. The saying “Don’t judge a book by the cover” mostly does not apply. Many readers do exactly that. “Oh, that cover looks interesting. I’ll check it out the first few pages.” Of course, now the cover is likely a digital image and the first few pages are from the sample on Amazon. And that’s not really new. It’s just the current version of strolling through our favorite bookstore, browsing the books on the shelves and checking out a few pages of those that look interesting.

But, with today’s speeded up world, with the thirst for instantaneous gratification, authors need to realize readers may likely not browse the first few pages. More likely, they will check out the first page…or maybe the opening paragraph…or even just the first sentence.

But even this is not that new. For centuries, readers have sampled the first sentences of a writer in much the same way they would taste a spoonful of soup to judge its flavor. If the soup was too salty or too spicy or too thin, it would be evident in the first few sips. For years, readers have had much the same approach to novels…and great writers understood this.

Even Charles Dickens—who got paid by the word, remember—recognized that he needed to hook his readers within the first few sentences. His opening lines to A Tale of Two Cities are some of the most famous first lines in literature.

Jane Austen, who was writing for a very different audience, understood this point as well. Her most famous work, Pride and Prejudice, continues to win fans two hundred years after it was first published and, in fact, has fueled an entire genre of Regency novels. She realized she needed to hook her readers right from the start.

“It is a truth universally acknowledged, that a single man in possession of a fortune, must be in want of a wife.”—Pride and Prejudice

Some of today’s best and most successful authors recognize this truth. They craft opening sentences and paragraphs designed to make readers want more, to feel the need to keep reading. As I’ve read great writers, I’m always struck by the power and pull of the opening of their novels. Take Tom Clancy, the insurance agent who became the most successful techno-thriller author on the ‘80’s and ‘90s. This is the opening line from Patriot Games, the second in his Jack Ryan series.

“Ryan was nearly killed twice in half an hour.”—Patriot Games

By the time Patriot Games  was published in 1987, The Hunt for Red October had already been a huge best-seller and readers couldn’t stop talking about the hero, Jack Ryan. So, for the opening sentence in book two, the author dispenses with the “Jack” and goes with just  “Ryan” and readers are crying for more. Patriot Games would go on to become an even bigger bestseller.

Probably my favorite historical mystery writer, James Benn, has mastered this as well as any. James writes murder mysteries that take place during World War II, with his protagonist, a young detective from Boston transplanted to various sites of the war to investigate. Readers get a healthy and enlightening look at history as well as a darn good whodunit in each entry. And his books always start off with a bang.

Strange the things you think about when you’re about to die. Even as the tracers lit the night air, their tiny silvery phosphorescence clawing at the small aircraft from the ground below, a tiny part of my brain mused on this practical demonstration of the scientific fact. The rest of my brain panicked madly, sending surges of adrenaline coursing through my body, urging me to get the hell out, now.”—The Devouring, a Billy Boyle WWII Mystery

I mean, how could a reader stop reading after that?

Emerging writers would do well to learn from these experts, old and new. You want your novel to start with a sentence or a paragraph that will catch your readers’ attention. What that is depends largely on your genre and your readers, but there are plenty of fine examples to learn from. Next, the sentence or paragraph needs to leave the readers wanting more, wondering “What’s next?” And these impulses have to be organic to the work. Readers don’t like it when an author dangles a tasty bit to reel his or her readers in and then switches to something else.

When I penned my new series, the Haunted Shores Mysteries, I tried to pay particular attention to this advice. With these novels, I was fortunate as I had much to work with. A reviewer described them as “a cold case murder mystery wrapped in a ghost story with a side of romance, all set in a beautiful resort location.” The different aspects of the narratives gave me several options to craft enticing opening lines.

Consider the start of Crimson at Cape May, the second in the series.

“There was something off about her.

Darrell Henshaw had first spotted the woman on the Promenade near the corner of the Cape May Convention Hall. Huddled in the shadows, her long white dress soiled and torn, she stared at him with sad eyes that might have once been enchanting but now seemed haunting.”—Crimson at Cape May

The woman, of course, is the Haunted Bride, the murder victim of my tale and my hope was to grab readers’ interest from the first page. It must have worked as Crimson earned bestseller status last fall, following in the footsteps of Blood on the Chesapeake, which reached the same rank a few months earlier.

Of course, there is more, much more writers need to do. Strong, enticing writing needs to continue beyond the first paragraph or page. The reader has to say to himself, “I need to keep reading to find out what happens next.” But if we, as writers, can’t hook potential readers in the first line or first paragraph or first page, we’ll never get a chance to tell them the rest of our story. They’ll move on to the next book or worse, the next tweet or Tik-Tok video.

Dr. Randy Overbeck is a best-selling author of the award-winning series, The Haunted Shores Mysteries, each a cold case murder mystery wrapped in ghost story served with a side romance, set in a beautiful resort location. He is the author and voice of a new podcast, “Great Stories about Great Storytellers,” which reveals the unusual backstories of famous authors, directors and poets. He is also a speaker in much demand, sharing his multi-media presentation, “Thanks Still Go Bump in the Night” with audiences all over the country. More info about his novels, programs and podcast can be found at his website www.authorrandyoverbeck.com .