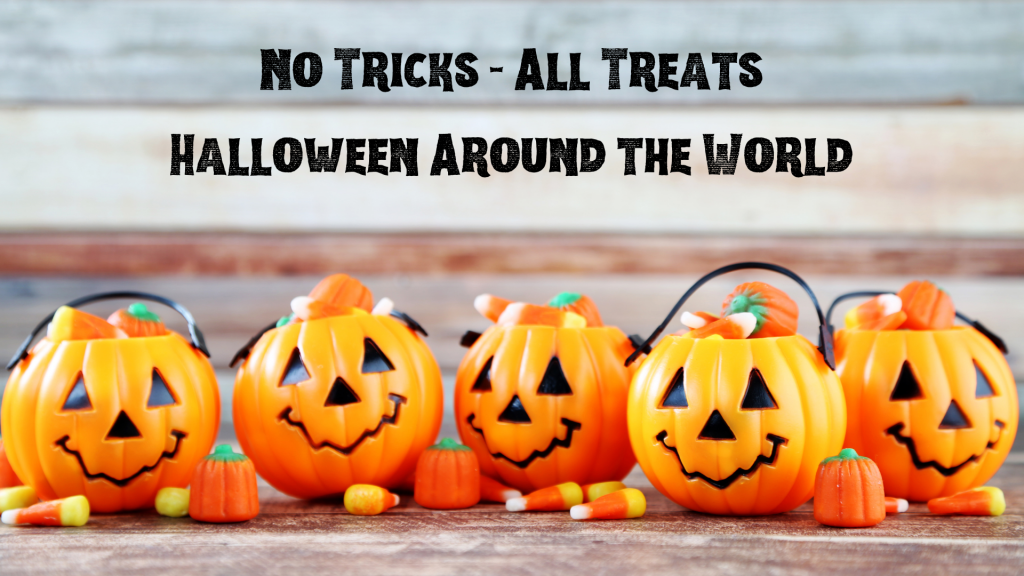 No Tricks All Treats – Halloween Around the World

by Eve Panzer, The Barefoot Librarian

I am privileged to have this platform to express my views on many things related to children’s literature. Often, I address serious topics such as racism, sexual orientation, book banning, etc. But today, I want to be frivolous since it’s my favorite holiday – Halloween.  What’s not to like? Children and adults assume any personality, animal, object, character, or whim of their imagination by donning a mask or an entire costume, and everyone can get a massive sugar fix.

Although teaching about other cultures was always a central theme of mine as a school librarian, Halloween in other countries was never on my radar. I focused on food, clothing, customs, celebrations, etc., reflecting different ethnicities’ uniqueness. And although I always pointed out the common humanness of all people, I never expected that Halloween would be something America shared with many other countries.

I happened to be looking at photos of my Irish son-in-law as a child, and one shot was of him in an adorable costume. When asked, he shared that Halloween was celebrated in Ireland, but in a low-key fashion and only for children. (No adults allowed – that’s a bummer!)  Halloween originates in Ireland and Scotland with the Celtic holiday of Samhain, a harvest festival celebrated on October 31 and November 1.

This piqued my interest, and I decided to see how or if Halloween was celebrated in other countries.  Some form of Halloween is celebrated in several countries worldwide, where most honor family ancestors, often by building altars or visiting cemeteries. A few of the celebrations are well known, such as Mexico’s Dia De Los Muertos. However, I was surprised by some countries where I did not expect there would be Halloween-type celebrations.

In the Philippines, a holiday called Pangangaluluwâ is celebrated on November 1, All Soul’s Day. Originally, children went door-to-door singing for candy, although now, trick-or-treating has become very popular. * And China and Hong Kong celebrate Yu Lan, The Hungry Ghost Festival. * Italy, Nepal, Bolivia, Cambodia, and Japan have similar celebrations. * What an excellent opportunity to teach children about other cultures through a fun holiday they love.

When looking for diverse Halloween books, I came across a title that deals with diversity based on gender identity and expression. The main character, Charly, is nonbinary – which includes many identities. Charly identifies as bigender, thinking of themselves as equally female and male.  Just as multicultural books teach us to understand, appreciate, and respect other cultures, books like A Costume for Charly teach us how to do the same with people of all gender identities and expressions.

About our Guest Contributor

Eve Panzer, the Barefoot Librarian, is an experience retired school librarian for pre-K through sixth grade who has a passion for children’s literature. She enjoys working with educators, librarians, schools, parents, and grandparents to select engaging and enriching books that make a difference. She now also professionally reviews picture and middle-grade books, focusing on independent authors and small publishers. You can find her reviews at Blue Ink Review, First Chapter Plus, Reader Views Kids, GoodReads, Facebook, and on her website. Holding a graduate degree in Masters of Library Science from the University of Texas, Eve has been a professional in children’s literature since 1999.